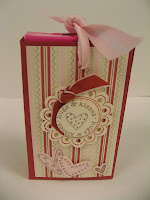 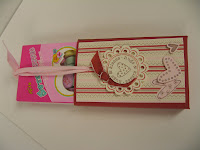 Here is another quick and easy project. I found the directions here.  These would be cute for your children’s Valentine gifts, they could even decorate the box. 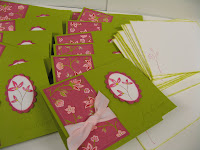 So here are my thank you’s for all the wonderful gifts everyone brought to my party. I couldn’t believe that I got gifts too! What a bonus. I used the Raspberry Tart DSP and the matching stamp set Sweet Stems. There is also a matching Sizzix Embosslit die. I decided to use my watercolor crayons to color in the flower.  For the scallop around the wide oval punch, I took and punched a 1 1/4″ circle punch and then used the circle scallop punch over that. I then cut apart the circle and clipped each little scallop, which makes it easier to put the circle scallops around the oval with the punched flowers. It takes 1 whole circle scallop and then an additional 4 more scallops to complete the oval. I used two way glue to glue down the scallops. I know, clear as mud, right? You can email me if you have any questions. 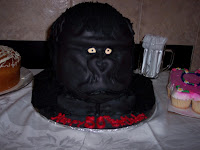 I bet most of you don’t know that last week (the 14th) was my 50th Birthday. My family and friends had a Surprise Birthday Party for me! Boy, was I surprised.  We were going over to Lynne Marini’s for a surprise birthday party for her husband. His birthday was the 10th (the day of the party). They told him it was for me and, they told me it was for him. So they had me go out to the garage when we got to Lynne’s and everyone was waiting for me. When I opened the door they all yelled, SURPRISE! Then my Sister came around the corner. (She is the one in the red shirt) I just lost it. I think it took me an hour to calm down. Tracey came Friday and my daughter picked her up from the airport and kept her a secret all day Saturday. (She came from Ohio). They had been planning my party for 2 months, no one gave anything away, or maybe I  just didn’t put two and two together.

My dear husband always said he was going to send me a “Gorilla”0-gram. Well he did. And I also had a gorilla cake that was awesome, and of course the cake was banana.  My Son and his girlfriend were in charge of the cake. They found a friend of a friend to make the cake. It must of weighed 40 pounds and cost a fortune. But it was really good cake, and looked so real.
My husband always says that he doesn’t have a birth-day, he has a birth-month. Well I had a birth-week. We had pizza Sunday night. I spent the WHOLE day with Tracey on Monday (can you say shopping?), and then my adopted Mom, Carol took us to dinner at Johnny Carino’s. Tuesday Michael, (my son) took me and Lynne for a Mexican lunch, which was very good. And on Wednesday my husband took me to dinner.
So, to sum it up, I had a fabulous birthday with all the people I love! I think I’m still glowing…..
Share
Pin
Email
0 Shares